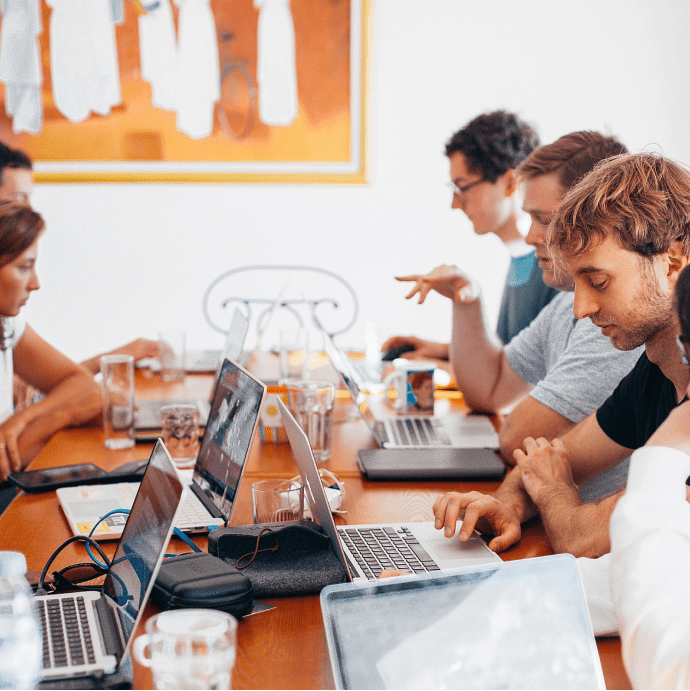 A Business With A Heart

A story of joy.

Humans Working is a company that essentially started itself. After experiencing a few soul-draining cultures, Naphtali decided to create a company with the primary goal of creating a fun, happy, creative atmosphere.

Read on for the full story.

Naphtali started a dev shop with the goal of creating a joyous, creative atmosphere after having worked at some soul-crushing agencies. Grew to 15 people.
April 2001

After 4 years of success, two financial catastrophic events hit at the same time. Naphtali tells the team to go home, but they insist on staying to rescue the company.
June 2001

We Rescue & Sell the Company

The team worked for 2 months for free to get our largest contract ever, turn the company around, and sell it.
2001-2018

After realizing that he'd developed something special, Naphtali spent the next many years studying culture, psychology, neurology, and spirituality to uncover how he could help other companies create something just as special.
January 2018

Naphtali published "Humans Working" and launched the company with the same name.

Contact us
The Early Years
In 1993, while still at Boston University,  Naphtali began working with Internet technologies at hte first-ever Internet consultancy. By 1997, he'd worked at 3 companeis, 2 of them prominent "interactive agencies," building the very first versions of some Very Large Websites, which was cool, but he was disheartened with the way that these companies treated their people.
Beginning Furnace Labs
Naphtali knew that it’d be fun to create software in the early days of the Internet, but his primary goal when starting the company was to create a fun atmosphere — a clubhouse if you will — that people would love coming to every day. He assumed that if he got that right, they'd be able to find cool clients and  make a good living. They organically grew to a 6-person organization that operated out of the living room of his apartment, to a group of 15 amazing folks in a “proper” loft-style office in downtown Boston.
Growth
They had a successful business for four years. They didn’t break any records, but were profitable, provided very competitive salaries, great benefits, and a really fun atmosphere. And they worked on projects that, for the most part, everyone found interesting and challenging. In many ways, even from a “standard business perspective,” they were more successful than the similar company across the street  that raised over $100MM, had some massive clients, and still managed to go out of business because they couldn’t make a profit.
Catastrophe
After four years, their biggest client, because their promised second round of funding didn’t materialize, went out of business. As a result, they weren’t able to pay a huge sum of money they owed  — for work already completed. As an evergreen idealist, Naphtali was shocked and clearly disappointed, but knew that within a year or so, they could recover. But, within a week of that happening, all of their other, smaller yet consistent and substantive clients, called and told them that “because of the economy” (it was just before 9/11/2001), they were “reevaluating”, and as a result, had no more projects to issue. It was at that point that Naphtali “knew” that the business was no longer viable.

With no money in the company bank account and payroll of $40,000 due in 2 days, it was clearly time to shutter the doors.  Naphtali summoned the team (10 people at the time) to the conference room, and with tears, told them that he loved them, that they'd had a great run, but it was time to go home.  There was no other option.  He told them that their paychecks wouldn’t be forthcoming and that that their health insurance and other benefits were canceled, effective immediately.  He offered to help them find new work  (which was tough at the time) and that he hoped they'd stay close-knit, but there was just no more viability for the company.
Rescue
It took a while for anyone to say anything, but eventually Jim — who had a bit of a reputation as a wise-ass — said, “I’ll stay.” It was unclear if he was being sincere or sarcastic, so Naphtali acknowledged his kindness, yet completely dismissed the comment. A few seconds — that seemed like minutes —later, Mark, piped up with, “Me too. I’ll stay.” Then Thomas, with his deep voice, “Me too. You’ll come up with something, you always do.” One at a time, around the smallish dark wood conference table, each of them said they’d stay. Naphtali was perplexed and had no idea where this amazingly generous gesture came from, nor what they really meant by it, and had  no words to express his feelings of deep gratitude in that moment. Naphtali told them that I had no idea what they meant, but he was willing to “run with it” and see what happened. He suspected that the adrenaline of the moment would wear off by the next morning.
Recovery and Redemption
Sure enough, the next day, and every day for 2 months, they all came to work, on time, and did whatever they were asked them to do; though, in truth, it's not entirely clear what they worked on! There was a light trickle of client work, but not enough to keep any one of them busy. They all stayed for 2months, without pay (more or less), until we landed a new client — the largest one they'd ever gotten! Soon thereafter, they were able to sell the company. In the sale of the company, there were only two points of negotiation 1) that the entire staff would be hired by the new company (they had wanted to cherry pick); and b) that everyone would get a raise. This was definitely a bold negotiation, since so many people, even programmers, we being laid off left and right at the time. We emerged from the darkness and joined the other company. While that experience came with its own set of challenges, Naphtali (and he imagines, the rest of the team) really felt like they'd made some lemonade.
Founding Humans Working
Following that amazing experience, while still working in technology, Naphtali realized that he had an inner knowing of how to create something really special within organizations. He spent several years studying what makes humans tick, especially in the context of professional organizations, and then used that knowledge to write a book called "Humans Working" and start a company of the same name.